This post is the third of three in a series on my systems for handling the increasing amounts of information, both outside and in my work. My routines for finding, collecting, reading and processing news articles, blog posts and social media links and scientific publications in my research and Ph.D. project were the topics of the two previous posts.

In this final post, I outline my system for all the information in my research work that is not scientific publications; my own notes and scribbles, copies from textbooks, web clippings, other people’s notes and similar. Scientific publications almost always come in a single format: As PDFs, typically published in journals or proceedings, with a title, a list of authors, page numbers, volume number and similar information. This makes it straightforward to index these in a literature database and to create an unambiguous workflow for them.

In contrast, the other types of information that I use in my work and discuss in this post are more inhomogeneous. Therefore, it is less obvious how to handle this type of information, and as I detail in the following the system has evolved since the beginning of my Ph.D. project – and probably will evolve more in the future.

Dropbox, but more and more Evernote

The information always goes to one of two places: In Dropbox or as attachments in notes in Evernote. Historically, most of this information has gone into the ResearchNotes folder in my PhD folder in Dropbox. This folder contains all of my own research notes (in the MyNotes folder) – mostly documents with sketches and mathematical derivations – and a Various folder where saved e-mail correspondences as well as notes and presentations from other researchers have been collected.

However, more and more I include this type of information as attachments in Evernote, often as part of my ongoing research journals. When I search for information in relation to what I’m working on right now, it makes perfect sense to attach it in my research journals together with my own observations, ideas and questions.

As an example, the picture below shows a PDF of a web page from the Lumerical documentation that I attached in my research journal on dipole emission in computational nanophotonics. Some things on this topic were unclear in the development of my own software, and I used the Lumerical documentation to understand how the problem is handled in the Lumerical software. The PDF could have gone into Dropbox, but fits better in context in my research journal and therefore ended in Evernote. 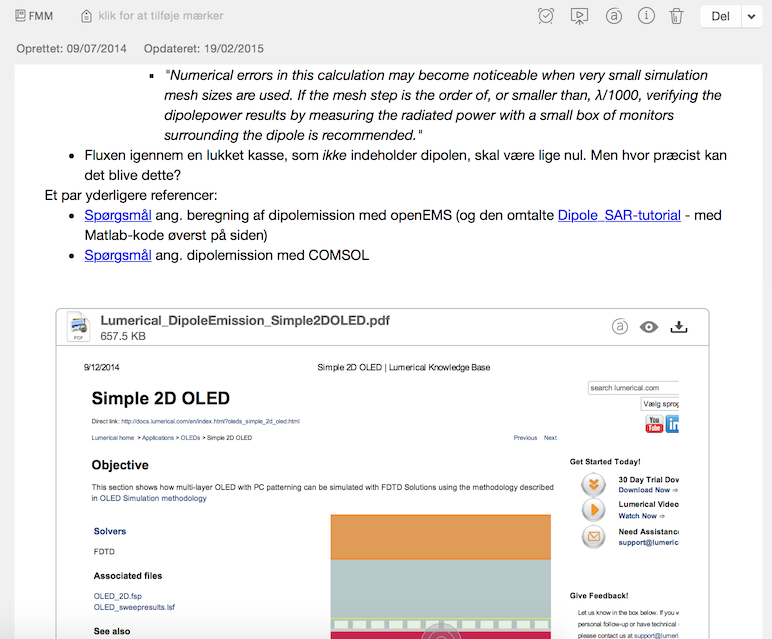 In that same Evernote research journal, I’ve also included a PDF of a relevant e-mail correspondence; a PDF scan of my own notes and mathematical derivations; Matlab profile reports; pictures and PDFs with plots of my own data; and pictures from discussions with my supervisor. Earlier, a lot of this information would probably have gone into Dropbox, but with the development of my Evernote research journal system it simply fits better in there.

What still goes into Dropbox is the notes and documents I work on continuously – it’s easier to keep these ready for editing in Dropbox than to import and export them to and from Evernote. Also, information that isn’t scientific publications and that doesn’t fit into my research journals goes into Dropbox. This could for instance be documents, notes and slides that are relevant to my work in general, but that don’t relate directly to what I’m working on right now. In the future, these might even go from Dropbox into Evernote since it’s easier to organize and search for the information there than in Dropbox.