Procrastination is the act of deliberately postponing or delaying something that needs to get done, and with our electronic devices constantly bombarding us with news, notifications, e-mails and messages, it is easier than ever before to procrastinate. 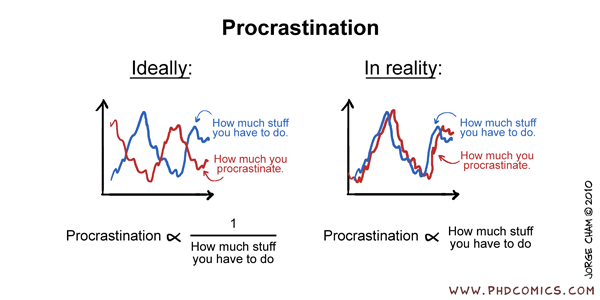 In this post, I share thoughts on why I – and other academics – procrastinate. Procrastination is certainly not only present in academia, and I don’t believe that academics procrastinate more than others. But there are some special circumstances in the way academics work, which make us prone to procrastination, and I believe it is important to be aware of this – to be able to deal with it. I also share tips on how to contain procrastination, and most of these are general and can be useful for non-academics as well.

The points I’ll cover are the following:

One obvious source of procrastination is the electronic devices that constantly try to win our attention, which has nothing to with working in academia. However, the way I as an academic work – often with unclear tasks and/or solutions, alone and independently and with long deadlines – also is an important source of procrastination, and I cover these in more detail in the following sections.

An inherent part of working in academia is to do research, that is, to come up with new ideas, concepts, theories, measurements and more. Doing research is not a straightforward way of working in which it is every day clear what needs to be done; in turn, one often faces problems that nobody solved before, and both practically and mentally this can constitute a daunting task – which may easily lead to procrastination.

One way of addressing this is to write down what work has been as well as specific tasks that should be undertaken; this makes complex problems more manageable, and I discuss this in more detail in a later section.

While much research is the outcome of teamwork, researchers in general work more on their own and more independently than people in other areas. This, in principle, shouldn’t be a problem since motivation and interest in progressing should be sufficient to avoid procrastinating. However, in practice it is easier to postpone work with procrastination when none or few people rely heavily on the progress of your work.

When working mostly independently, it can be an idea to impose your own deadlines to suppress procrastination – more on this in a later section.

Working with long or no deadlines

My Ph.D. project is a three year long project, and while I and my supervisors agree on some deadlines as we go along, for the progress in my work, for conference submissions and for journal manuscripts, it is mostly one long project. This way of working is fairly general in academia, and as such most academics work on projects that have relatively long – or none at all – deadlines.

This may be a source of procrastination: “If we didn’t decide exactly when this part of my work should be done, what would the problem in spending 15 minutes here and 30 minutes there on other things be?”. This, of course, can be a problem as it lowers your productivity and ultimately limits how much work you get done.

A solution is to impose your own deadlines – again, as discussed in a later section.

I procrastinate, to some extent, every day at work, by reading news, by visiting social media and by researching stuff unrelated to my work, and I have thought a lot about why I do it. I don’t think I’m able to completely avoid it, so my ambition is rather to contain it, that is, to fit it in in a way that allows me to remain efficient in my work.

My tips for achieving this can be split into two categories: General tips that are related to electronic devices and technology (e-mail, smartphone, tablet, Internet browser), and some specific tips for academics (journaling work and formulating specific tasks, making deadlines, making after-work plans).

Do you really need that little notification on your computer screen when a new e-mail arrives? For a long time, I didn’t think about this, but after I’ve turned these notifications off in Outlook, I realized that having them on was just stupid: They would steal my attention for no reason whatsoever. Likewise, I have turned off e-mail notifications on my iPhone and iPad; new e-mails are received when I open the e-mail app, and not otherwise.

No e-mail is so urgent that you have to deal with it right now, and chances are that you are in the middle of some concentrated work – and that e-mail notifications constantly compete to ruin your concentration.

Smartphone: Put it into flight mode

A great source of procrastination for me is my iPhone on which I can access social media, read RSS feeds and read news – all of which are mostly not part of my work. Therefore, I have been experimenting with ways to minimize procrastinating on the phone, and some of these are covered in the next section.

However, the ultimate solution is to put the phone into flight mode, which “A Year of Productivity” inspired me to. I haven’t been doing this for very long, but recently I tried to put my phone into flight mode in the morning – turn flight mode off while I went for lunch – turn it back on when I got back from lunch – and then off again sometime late in the afternoon. So far it works well, and I’m going to continue doing it for a period to see if it’ll continue to work.

If this seems too drastic, then a good starting point is to lower the number of ways your smartphone interrupts you, as discussed further in the next section.

Tablet: Get one and work on it

The iPad is an important part of My Digital Workflow, and it can also be used to minimize procrastination. When I work at my desktop computer – with two big screens – I can easily visit several web sites, write (work and private) e-mails, watch a video on YouTube – simultaneously with running simulations in Matlab and writing a work document.

I can, in principle, do all the same things on the iPad, but with its smaller screen and one-app-open-at-a-time it naturally puts some limitations on what can be done simultaneously – which is helpful to stay focused on the task at hand. For example, I do most of my reading on the iPad, as opposed to on the computer, since as described above I more easily stay focused on the iPad than in front of my computer – which is yet another reason to acquire a tablet.

On my desktop work computer, I use Nanny For Google Chrome (but cannot find a link for this extension) and in Firefox use LeechBlock to block a number of sites, including Facebook, Twitter, Feedly and various news sites. Since most of my work happens in front of this computer, I would tend to visit these sites frequently when I’m in the procrastination mood, and these browser add-ons help to avoid this.

I suggested to use these add-ons to others, but often people think it’s silly and say that they prefer to keep pretending they actually have the backbone to simply not procrastinate on these sites. However, in my experience – and admittedly that is silly – it doesn’t work, and enforcing hard boundaries is just easier.

Journal and plan your work

As I have written about before, I almost every day write a work journal, either as I go along or at the end of the day. Specifically, I write what I have done (practical details, chosen parameters, considerations on why I did exactly this), what results my work has led to (graphs, data files, interpretations of the results), and finally – and most importantly in this context – specific questions that need to get answered (things I don’t understand, things in my results that seem wrong, things I need to read about) as well as specific steps I will continue with the day after.

If, when I come to work in the morning, it is unclear what I need to do and investigate to continue my work, I tend to do other stuff, that is, to procrastinate. Writing a work journal with as many details and specific things to look into as possible makes getting started first thing in the morning a lot easier – and I therefore still highly recommend Ph.D. students (and other researchers) to write a work journal.

Make your own deadlines

As discussed earlier, much work in academia has fairly long deadlines, and it can thus be a good idea to impose your own deadlines. As I have written about before, one way to do this is to find relevant conferences – that always have submission deadlines – and submit contributions for these. This forces you to get some work done by a certain date and thus naturally imposes deadlines in your work.

However, you cannot submit work for conferences constantly, and it can therefore be an idea to introduce weekly or biweekly deadlines; what do you anticipate to be able to have done within this period? Write it down and evaluate at the end of the week(s) whether you succeeded in finishing what you wrote. Writing it down creates a bigger commitment, which may help to not procrastinate – as you will feel obliged to get the work done by your deadline!

Sometimes I write work plans as described above, but otherwise I use my biweekly supervisor meetings as deadlines – as I prefer to have some progress and new work to talk to my supervisors about. These meetings thus become my deadlines on top of occasional submission deadlines.

When I don’t have plans after work, it is not important that I leave my office by a certain time, and this sometimes – especially in the afternoon – makes me procrastinate more. Even when I don’t have plans after work, I’d like to get home and do other things than work, and procrastination in that case only gives me less time at home. On the other hand, when I need to leave by a specific time (for example, to travel somewhere), I tend to be more efficient since I like to get things done before leaving.

Ideally, then, one should leave by a specific time every day, but that wouldn’t work for me personally; I need to be able to stay until things are done and understood. I had a period where, due to a long commute, I needed to leave fairly early every day, and that was frustrating since I felt I was lacking time to properly do my work.