During four weeks in August I had the pleasure of attending the summer school on quantum optics and nanophotonics at École de Physique des Houches in Les Houches in the French Alps. The scope of the school was to merge quantum optics and nanophotonics by bringing together leading researchers from the two fields, and I and 50 other Ph.D. students and postdocs were given the chance to witness and contribute to this fusion of the two growing fields of research.

The program of the school included twelve lecturers, giving each three to six lectures, as well as eight seminar speakers. The topics spanned broadly from the use of quantum emitters, such as quantum dots (QDs), single-molecules and nitrogen vacancy (NV) centers in diamond, to generate single-photons, in cavity quantum electrodynamics (cQED) and to store and process quantum bits (qbits), over subwavelength focusing of light for super resolution, to fundamental questions in quantum mechanics on measurement strategies and quantum information. 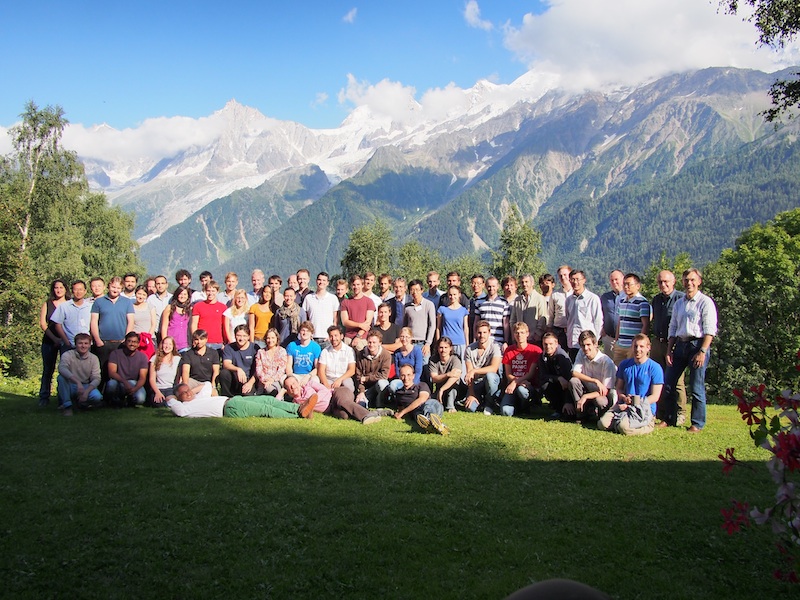 In this post, I will elaborate on some of the topics covered during the school and point out the interesting fundamental and application aspects of this type of science and research.

Central in most of what I will discuss is the interaction of light, either in the form of electromagnetic waves or as photons, with matter, e.g. atoms, molecules or nanostructures such as QDs and metal particles. Light may be absorbed in the matter by lifting an electron from a state with low energy to a state with higher energy, and conversely light may be emitted from the matter by moving an electron from the higher energy state to the lower. These fundamental processes of light-matter absorption and emission are in fact what makes everything we see visible, and it is exploited in much modern technology. As I will get back to, it may be further exploited to create and manipulate individual quantum states which may pave the way for e.g. quantum information technology.

During the school, I tweeted about the lectures and scientific program (from August 5 to August 30, 2013), so you may also have a look at my Twitter profile.

Jeff Kimble from Caltech gave lectures on the efforts to realize quantum networks, based on atoms trapped in various environments. Much of the involved physics is thoroughly reviewed in The Quantum Internet, an article in Nature from 2008 by Kimble. 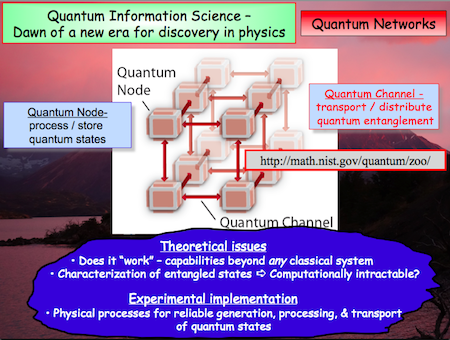 What I found particularly interesting in Kimble’s lectures was the direction towards integrating quantum emitters like atoms in nanophotonic structures such as photonic crystals. In my group, many activities revolve around nanophotonic structures like photonic crystals, and my own Ph.D. project is concerned with optical modeling of such structures; with feature sizes on the order of the wavelength, fully retarded and vectorial modeling of light propagation is required to achieve optimal coupling between the light and the quantum emitters. A fact which is being increasingly accepted by the quantum optics and atomic physics communities.

Jelena Vuckovic gave a seminar that I attented in Copenhagen in April, and I had therefore recently heard about some of the research in her group; QDs in photonic crystal waveguides and cavities, e.g. for achieving strong coupling between the emitter and the cavity. Nevertheless, I found her lectures interesting and inspiring for similar work going on in my own group.

Embedding QDs inside a solid-state environment may significantly alter their light emission properties, and in particular it is possible to strongly couple the emitter to a cavity – which may give rise to the emission of non-classical light like single-photons. This is achieved in Vuckovic’ group with QDs inside photonic crystal cavities. The generation of non-classical states of light is fundamentally interesting, but it might also have practical applications in quantum information technology and quantum cryptography.

Another interesting application of the QD-photonic crystal cavity system is for optical switching; by coupling photonic crystal waveguides to the strongly coupled QD-cavity and tuning the wavelength, optical pulses (that contain as little as a single photon!) are either transmitted or reflected, which may have applications in ultrafast optical communication systems on short length scales. This type of work is described in more detail in this article from Vuckovic’ group and in this article from another group. 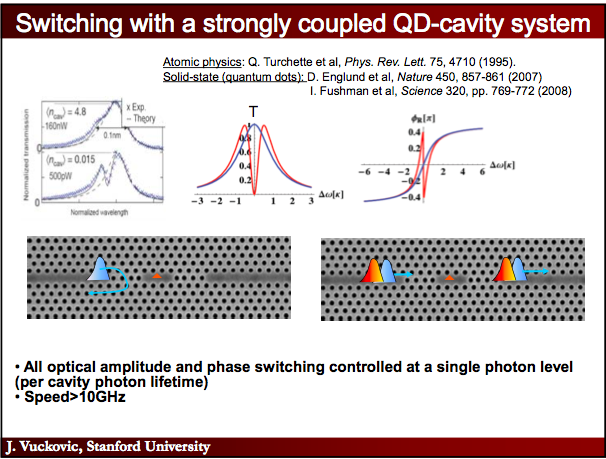 Oskar Painter gave lectures on cavity optomechanics in which optical cavities are coupled to mechanical oscillators. This basic concept of coupling optical and mechanical structures and investigating their interaction always appealed to me, so even though I never studied it in any detail, I was looking forward to learning more about the field. 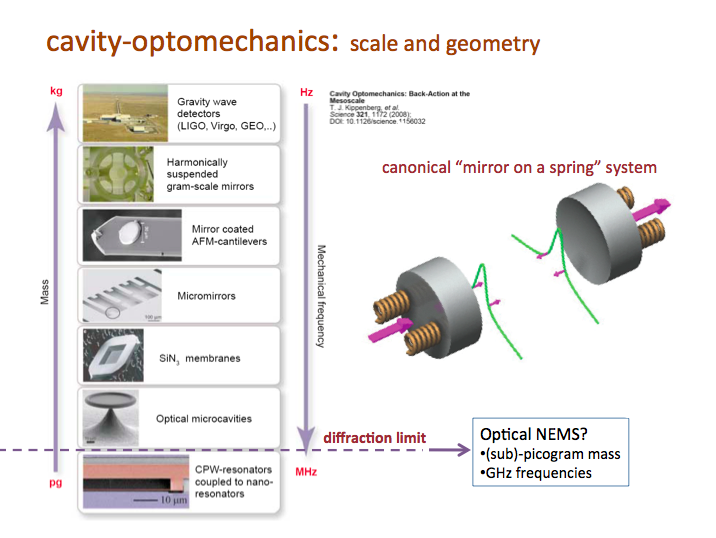 I find this model and the interesting physics that can be derived from it exciting, and I recommend this arXiv review article that covers virtually every aspect of cavity optomechanics and which I used as background material for Painter’s lectures.

Interestingly, cavity optomechanical systems have been realized using nanophotonic structures such as one-dimensional photonic crystal waveguides and cavities, and as mentioned in the context of Jeff Kimble’s lectures above this focus on wavelength scale structures, that I work with in my own Ph.D. project, is an interesting perspective.

The framework of cavity optomechanics provides ways to probe quantum mechanical effects such as ground state cooling and zero-point motion, and more practically a wavelength conversion scheme based on cavity optomechanics has been proposed; see the details and more on the fundamentals and applications in the arXiv paper mentioned above.

The work on zero-point motion by Painter and co-workers is illustrated in this neat little Ph.D. Comics video.

NV centers have a zero-phonon line at 637 nm, and this transition may be excited resonantly at this wavelength, or non-resonantly at 532 nm via fast phonon relaxation processes. The ground state of an NV center is a triplet state whose hyperfine structure contains three non-degenerate energy levels, corresponding to different electron spin configurations. Importantly, two of these states are split-off from the third by 2.87 GHz, and this spin-dependent transition may thus be probed using microwave excitation of individual NV centers. This may produce Rabi oscillations between the hyperfine levels, and since these are not equally fluorescent, this may be observed by monitoring the fluorescence from the NV center (see the picture). Also, the electron spins in NV centers turn out to have very long coherence times which makes them ideal candidates for quantum memories. 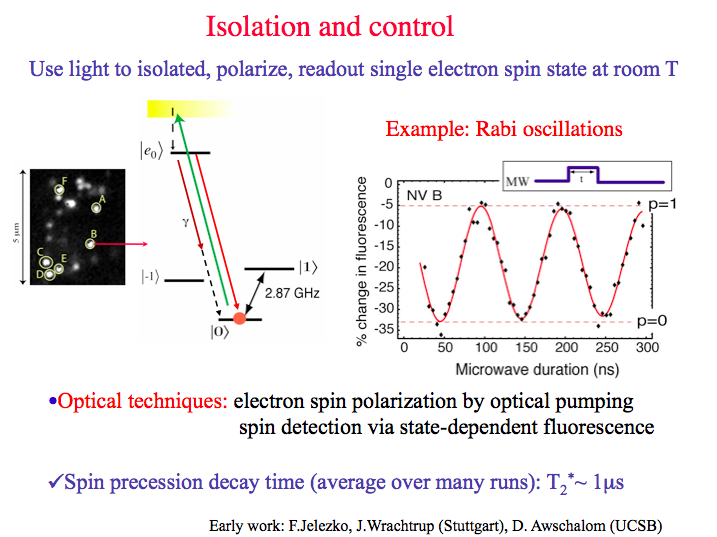 The detailed analysis of these spin manipulations involves complicated quantum mechanical interaction Hamiltonians, and I studied the details of this in a Ph.D. dissertation from Lukin’s group.

During the lectures, Lukin outlined five things he wanted to make sure that we know to be able to study quantum optics; the Bloch sphere, dressed states, optical pumping, single-photon Rabi oscillations and properties of classical and quantum states of light. I find it enlightening when someone with a profound understanding and overview of a field points out the most important things to learn and understand.

All the Others. And École de Physique des Houches

The above is only a small selection of the inspiring and interesting topics we were exposed to during the summer school. For me the school was an eye-opener for the possible synergies between quantum optics and nanophotonics, and I believe there is a lot of interesting science and research to be discovered in the borderland between these fields. Therefore, I thank the organizers of the school for a well-composed scientific program.

Finally, I would like to complement l’École de Physique des Houches where the school was held; it is a beautifully located and professionally managed school, and I urge anybody in physics to consider attending or organizing schools or seminars at this place.